The valley of Ete Morto

A short but challenging itinerary, through a typical Marche small valley. The Ete Morto valley, between the provinces of Fermo and Macerata. We will face some “walls” (short and demanding climbs), pleasant descents and others that do not allow distractions. Roads with almost no traffic and some urban stretches. We will cross characteristic medieval villages and cultivated hills. The Sibillini Mountains on the horizon will keep us company, but we will always be a stone’s throw from the sea … 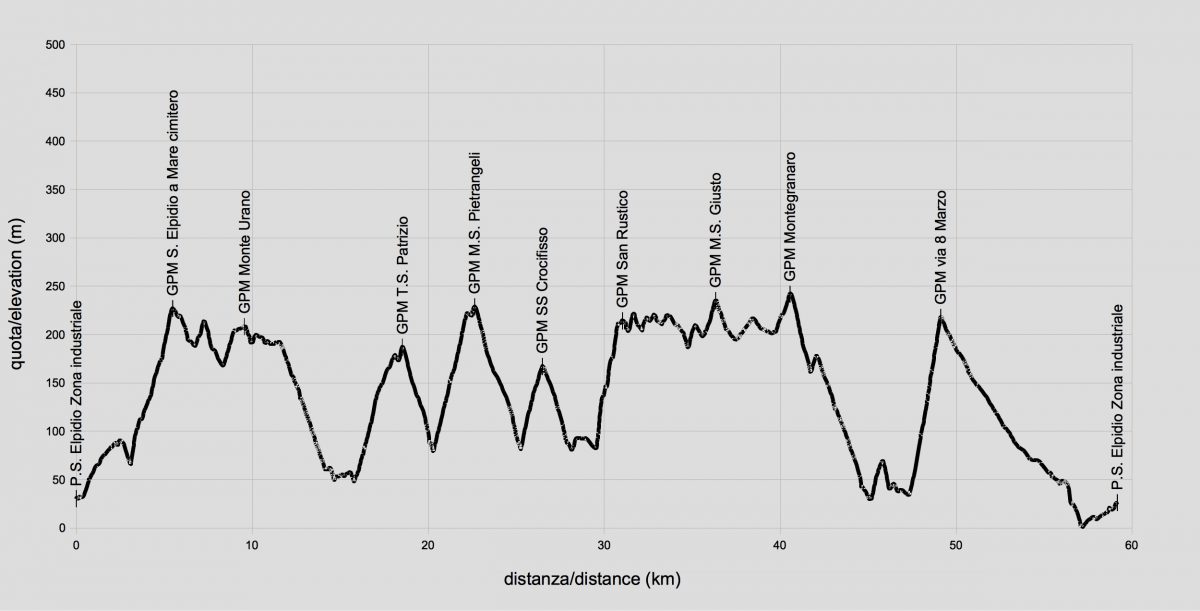 Strange story that of the Ete Morto river. Once this small river, having a stream character, with a low water flow, which becomes impetuous following important weather events, came directly to the sea. Probably its mouth was that of the current Chienti river, a much more important waterway which, with the arrogance of those who are bigger, stole it from its younger cousin. Since then the small Ete Morto became a simple tributary of Chienti. A local legend says that its violent floods represent a sort of revenge for the theft suffered.

The valley is not very wide and does not reach the Sibillini mountains. The hills are home to beautiful medieval villages, like the whole Marche region. At the bottom of the valley there is the very dangerous SP219, the Mezzina Road, where cars speed by,  to be avoided by the cyclists. Fortunately, there are a lot of secondary roads, as we will see.

We start our tour from the B&B Pedalare con lentezza, in Porto Sant’Elpidio. A short stretch of industrial area and we immediately find ourselves in the middle of the countryside, with cultivated fields and olive trees. We go up towards Sant’Elpidio a Mare along Strada Vecchia Porto, which immediately tests us with slopes of 14%. It is difficult immediately, but this is only the starter of the day. 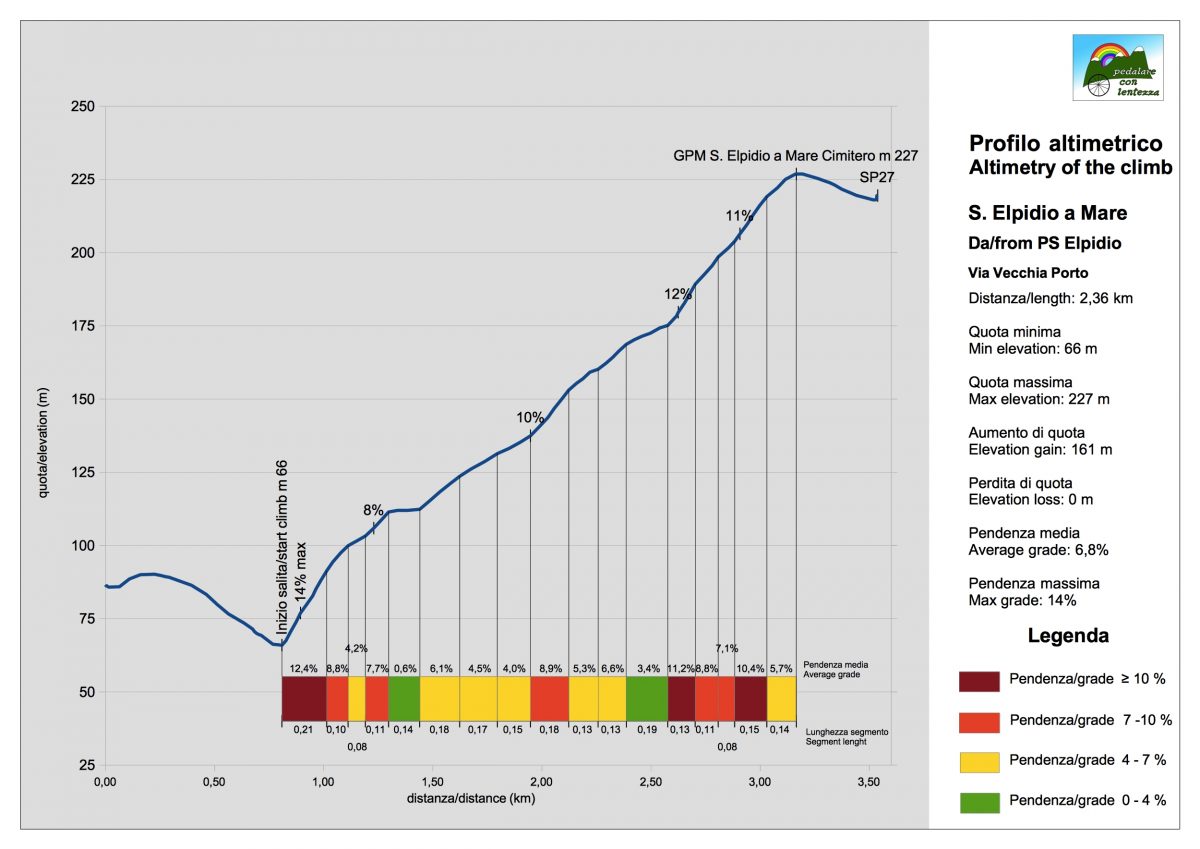 We proceed for Monte Urano without great problems. After the inhabited center we jump to the right towards the bottom of the valley, along a panoramic road with a sometimes uneven asphalt, which does not allow us any distraction. Arrived at the bottom of the descent, we avoid the Mezzina Road slipping into a secondary road on the right river bank, which leads us to Torre San Patrizio. The climb does not present great difficulties. Practically a long straight without hairpin bends, with peaks at 11%.

A fast descent and immediately we start to climb again towards Monte San Pietrangeli. The village seems to look at us from above, while we face the two hairpin bends, the first easy, the second decidedly demanding, which lead us up to the ridge. A dog barks at our passage, but we don’t care about it, because all our attention is paid to the suggestive view of the ancient walls that loom. 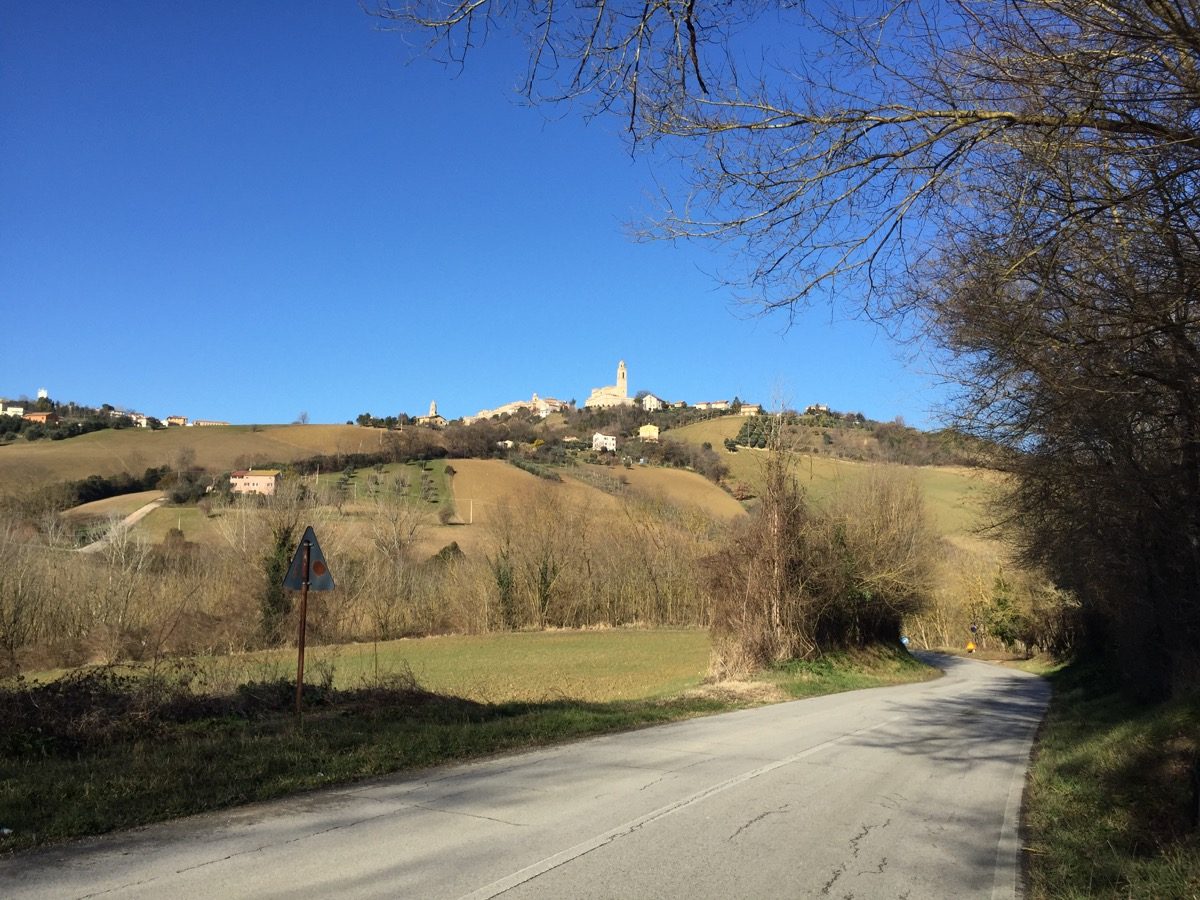 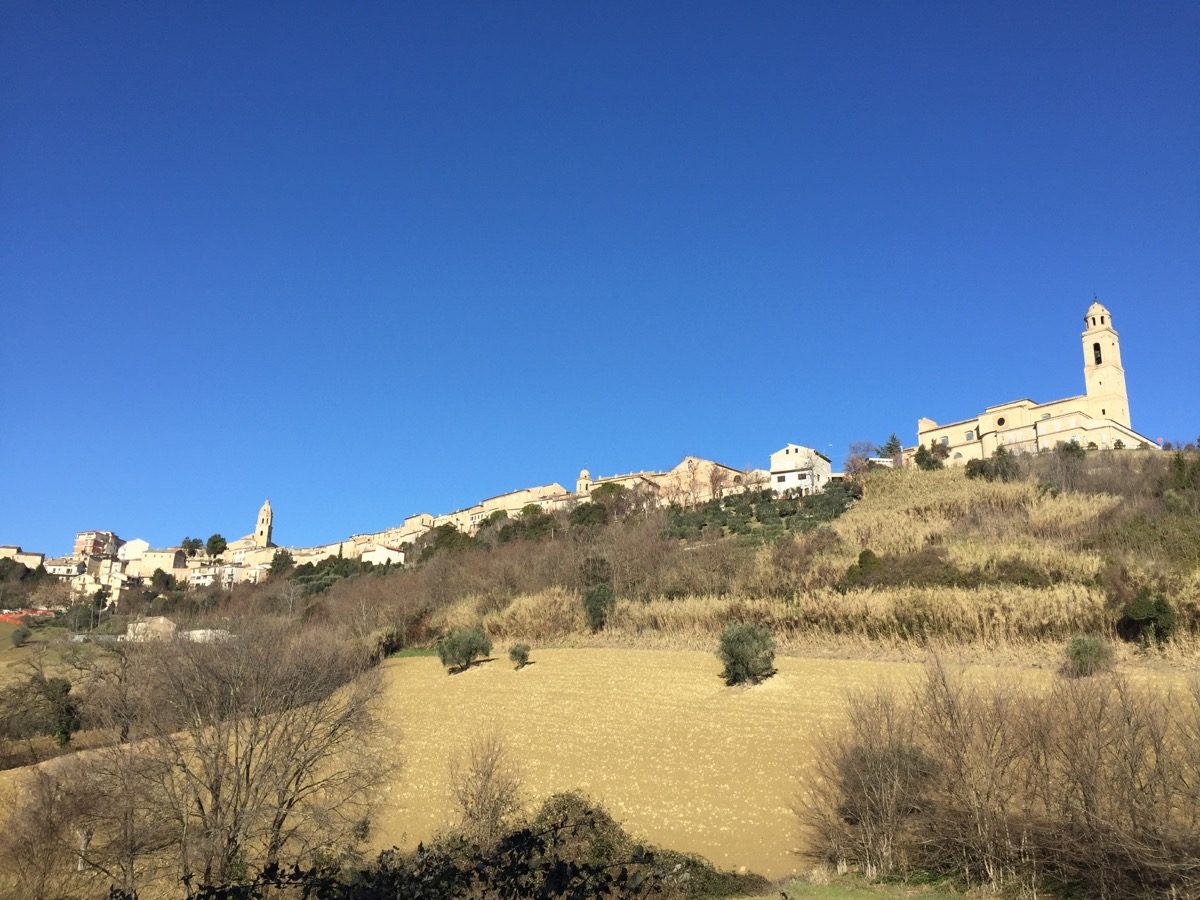 Once filled the bottle at the public fountain, we throw ourselves into a fast and restful descent. A long pleasant straight and then a couple of tight and dangerous curves. Near the ditch the road is always slippery, sometimes frozen in winter. It is better to pay close attention and not to reach the lowest point on the bridge too fast. The climb to Francavilla d’Ete is not long nor demanding. The cultivated hills are an always reassuring landscape.

We descend again, towards the bottom of the Ete Morto valley, where we find the crossroads for San Rustico, which announces the arrival of one of the great effort of the day. The ascent of San Rustico comes suddenly. Two terrible ramps, around 20%. Bike control is essential. The front wheel tends to rear up. The effort is felt and the only thing that saves us is the limited length of this wall. The road becomes flat near the church, where we also find a public fountain and take the opportunity to enjoy the view of the Sibillini Mountains beyond the hills. 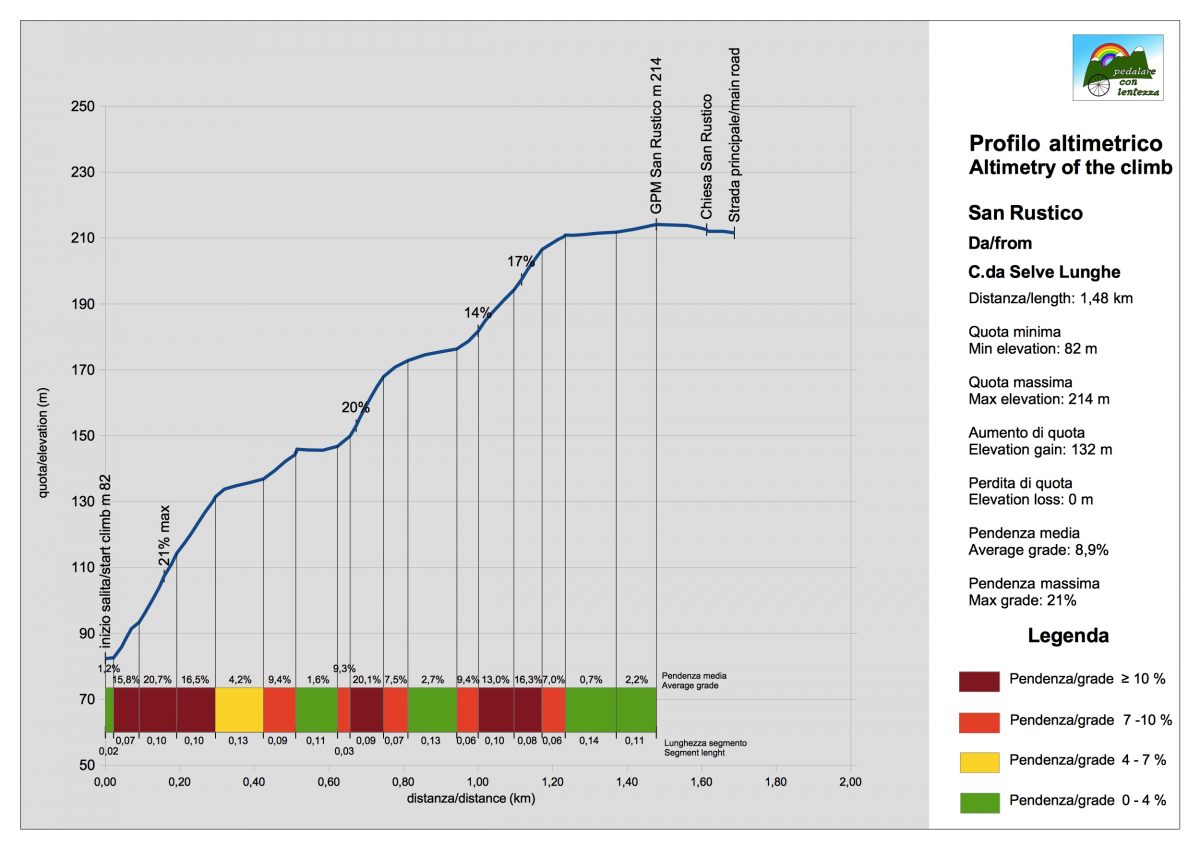 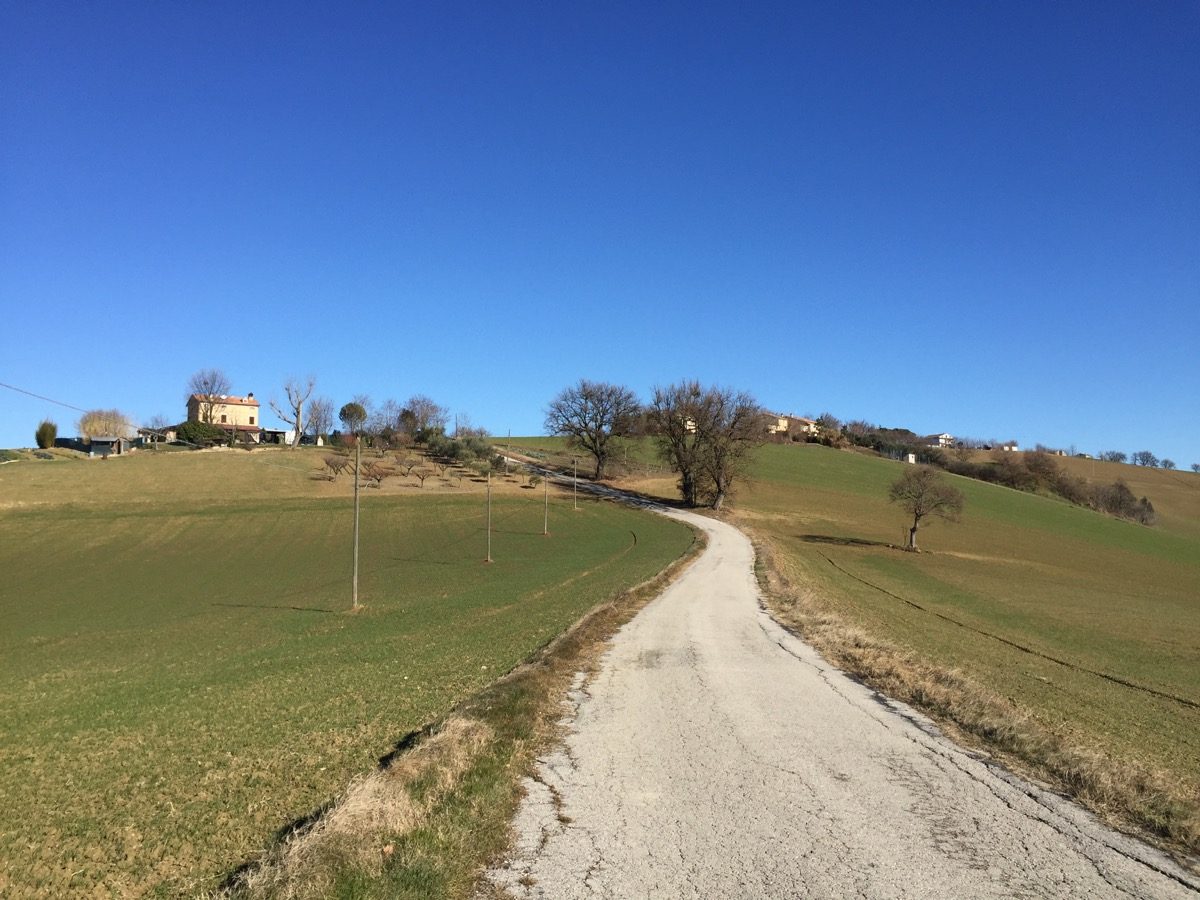 The terrible ramp towards San Rustico 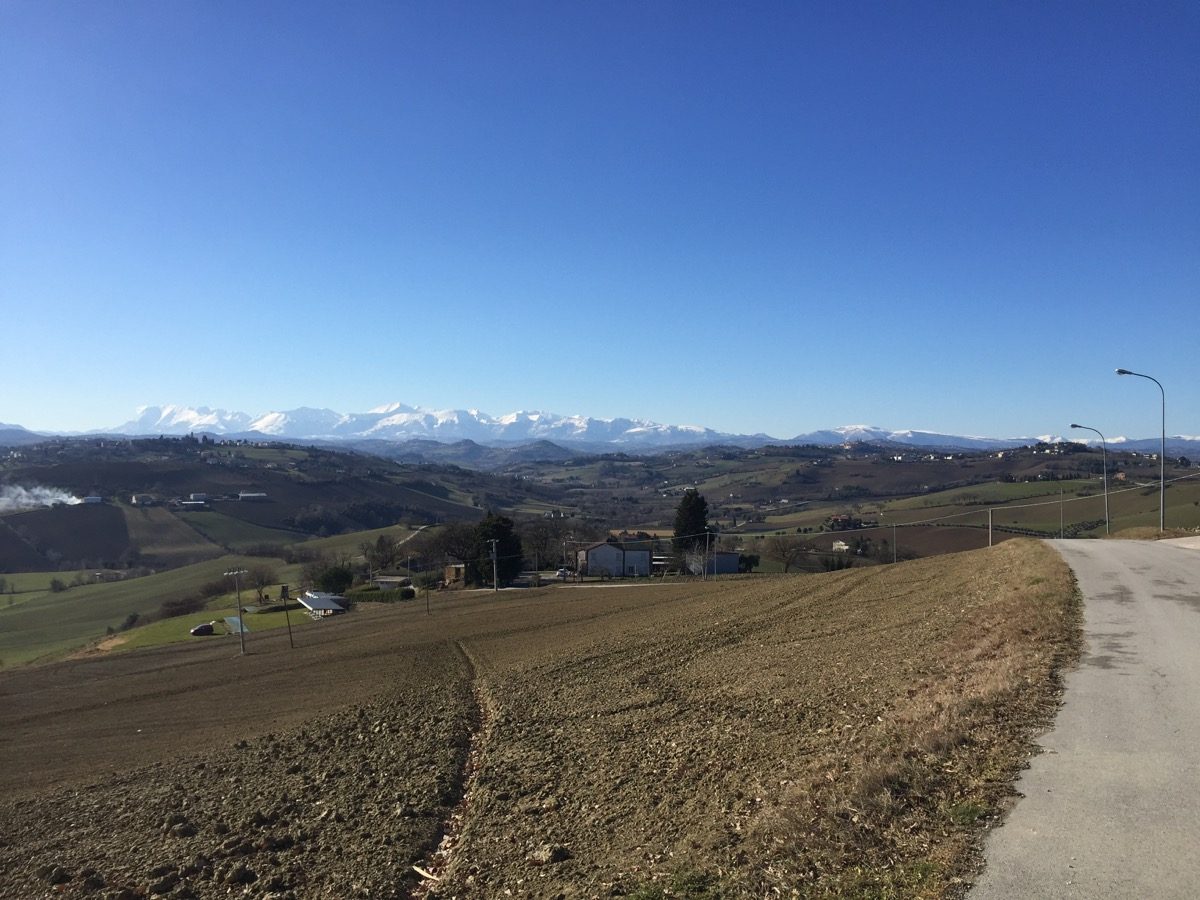 The Sibillini Mountains from San Rustico 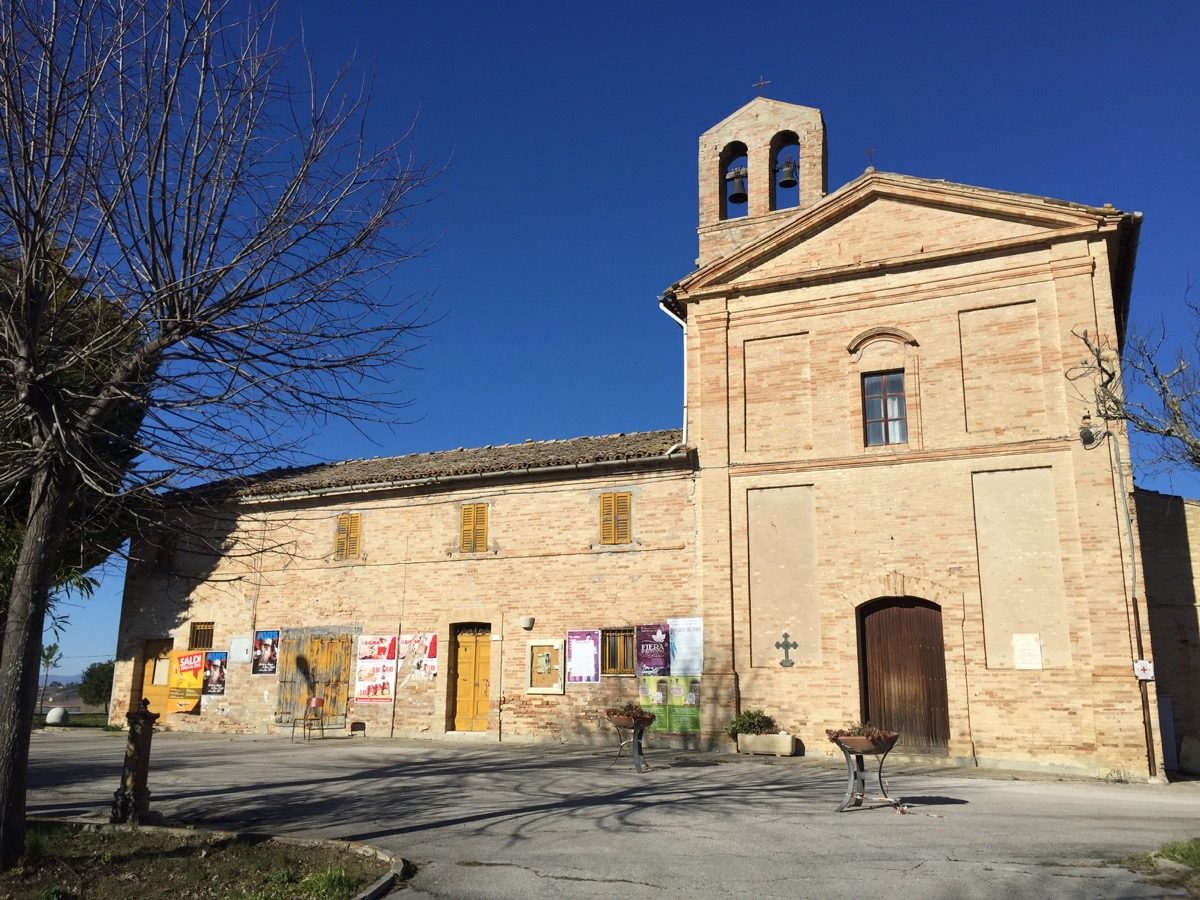 The Church of San Rustico

At this point we begin to travel for a long ridge that leads us first to Monte San Giusto, a village famous for its Clown & Clown Festival, so much so that it deserves the nickname of the City of Smiles, then the footwear center of Montegranaro. Here the attention must be maximum, since, even if for a short time, we must pass through urban traffic. 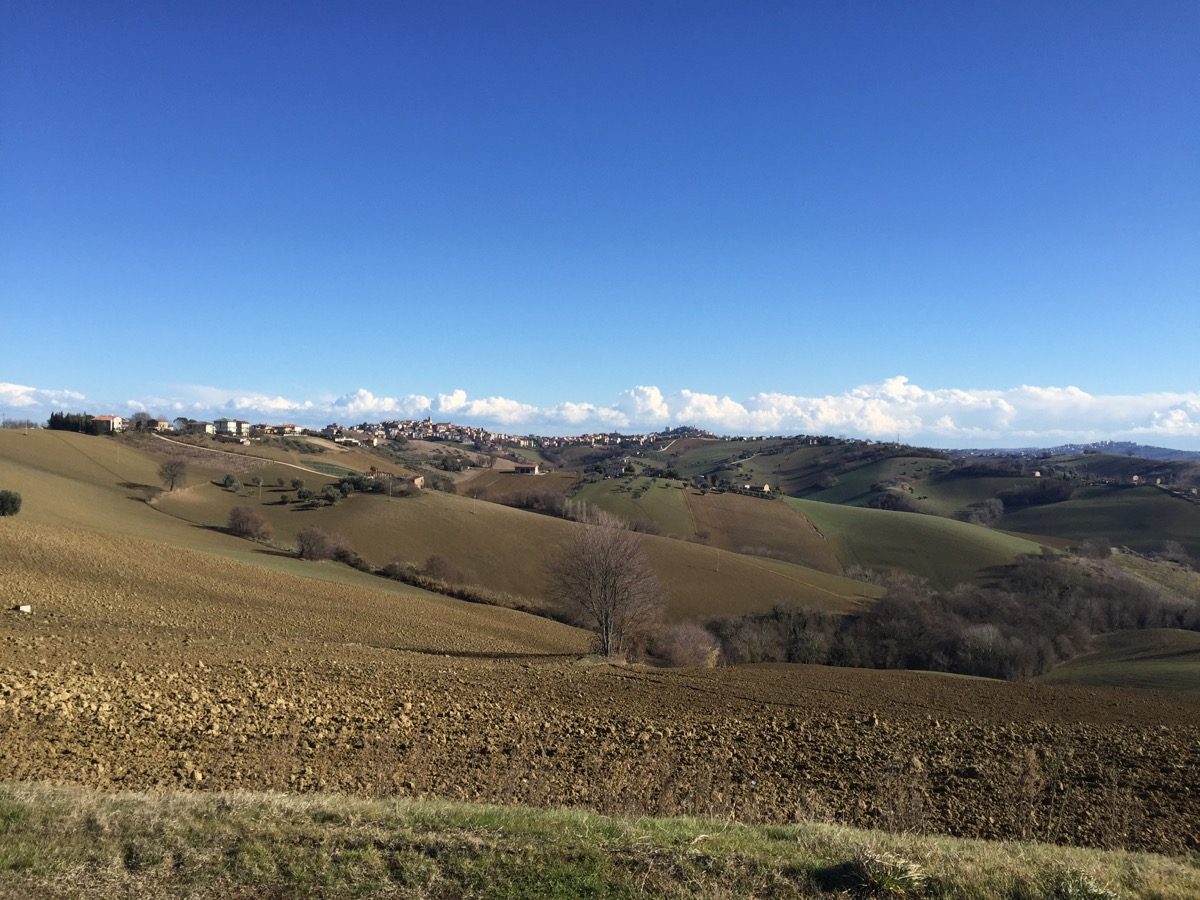 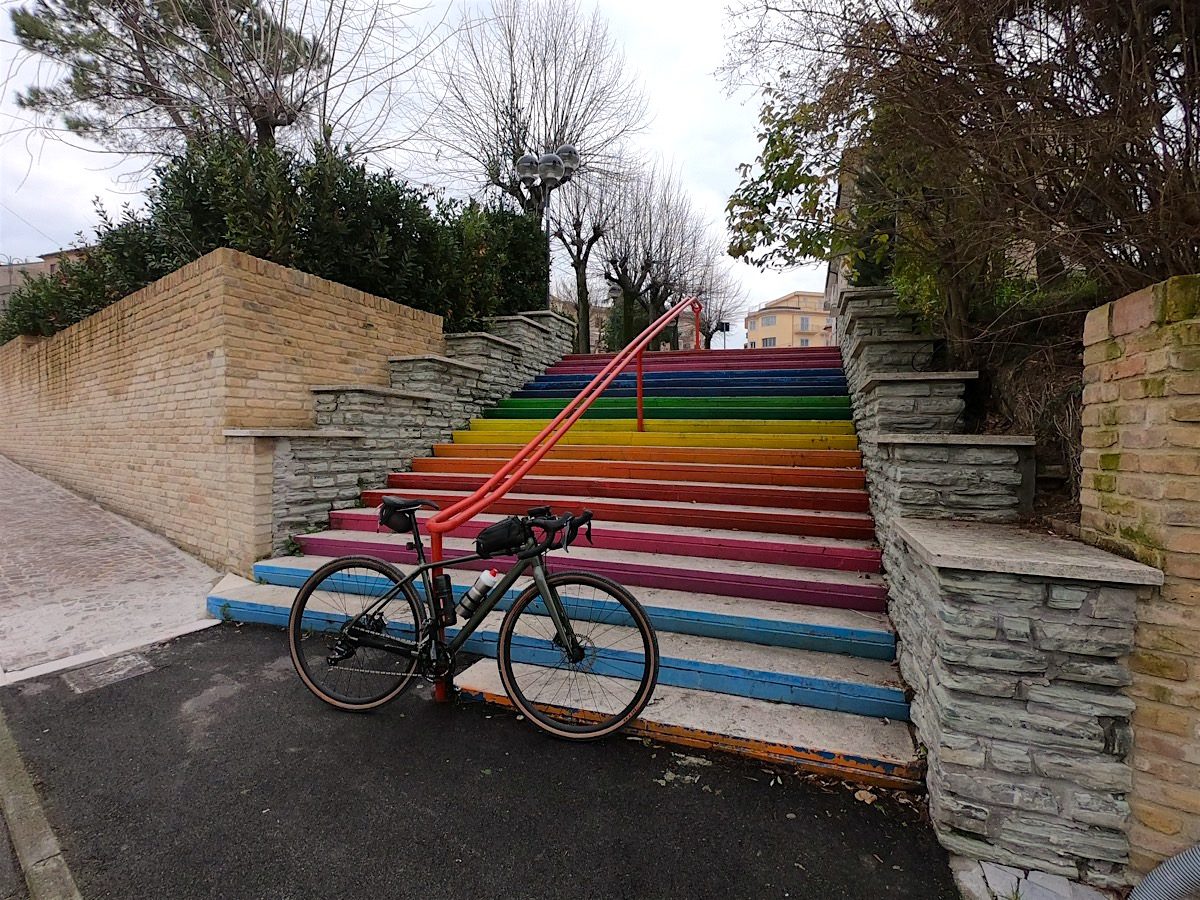 one of the colorful staircases of Monte San Giusto

We descend once again towards the Ete Morto River and on the other side of the Valley we see the profile of Sant’Elpidio a Mare, a characteristic medieval village, famous for its historical re-enactment of La Contesa del Secchio, which takes place in the Summer. The ascent from the Ete River is certainly the most demanding, in particular the road we will face in this itinerary. 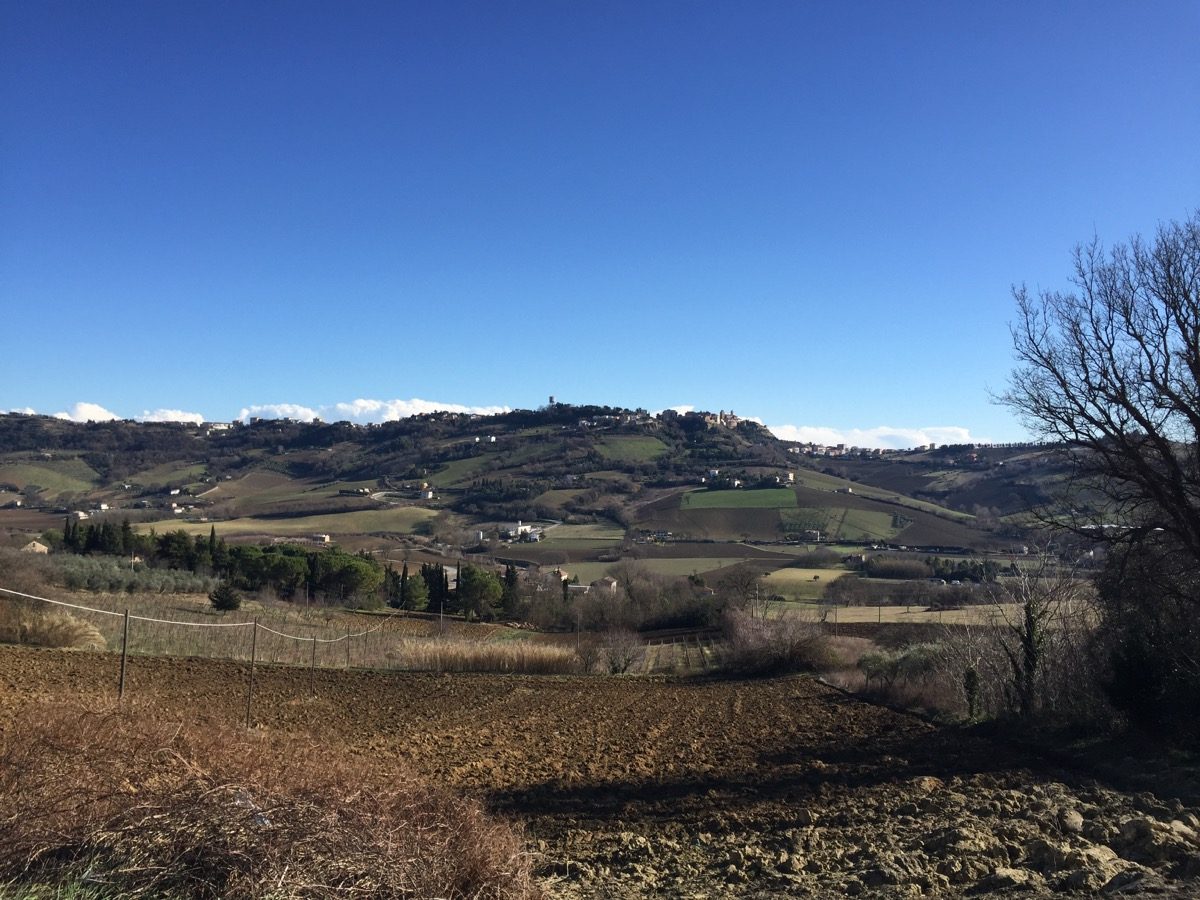 Approaching Sant'Elpidio a Mare from the Ete Morto valley

A traffic light to cross the Mezzina Road again, then a dangerous intersection and we enter the SP26 towards Casette d’Ete. We do not reach the inhabited center, because immediately after the chandelier factory we turn sharply to the right to take the terrible Via 8 Marzo. Almost two kilometers with an average gradient of over 10%. A couple of 14% peaks. A series of narrow hairpin bends that climb up the steep slope. Almost 200 meters of elevation gain. A nice climb that remembers, in a small way, some much more famous mountain roads, but here we are a stone’s throw from the sea. 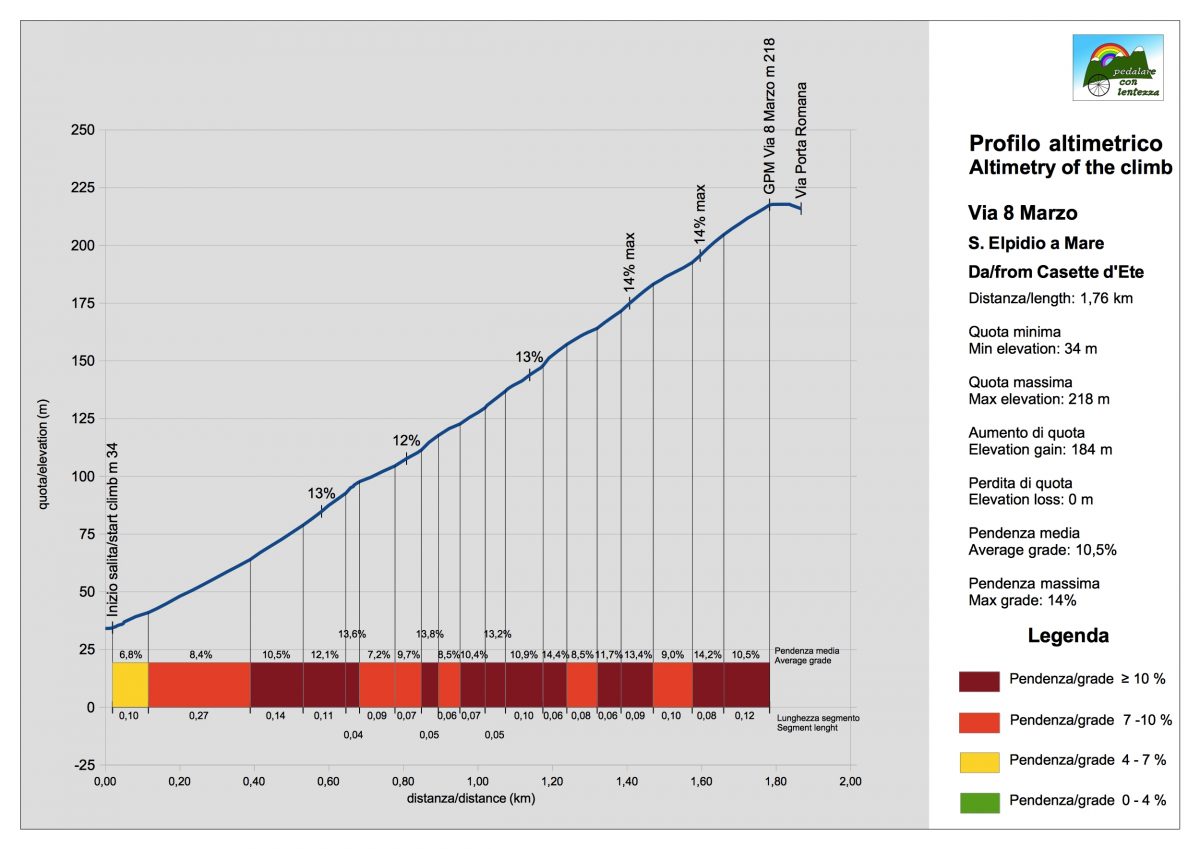 Quite suddenly the climb ends. Thus begins a long and pleasant descent that takes us back to the coastal town of Porto Sant’elpidio. The view of the blue sea becomes more and more dominant on the green hills and in short we find ourselves at the starting point, certainly tired and proven by the efforts made, but with the satisfaction of having completed a decidedly demanding tour. 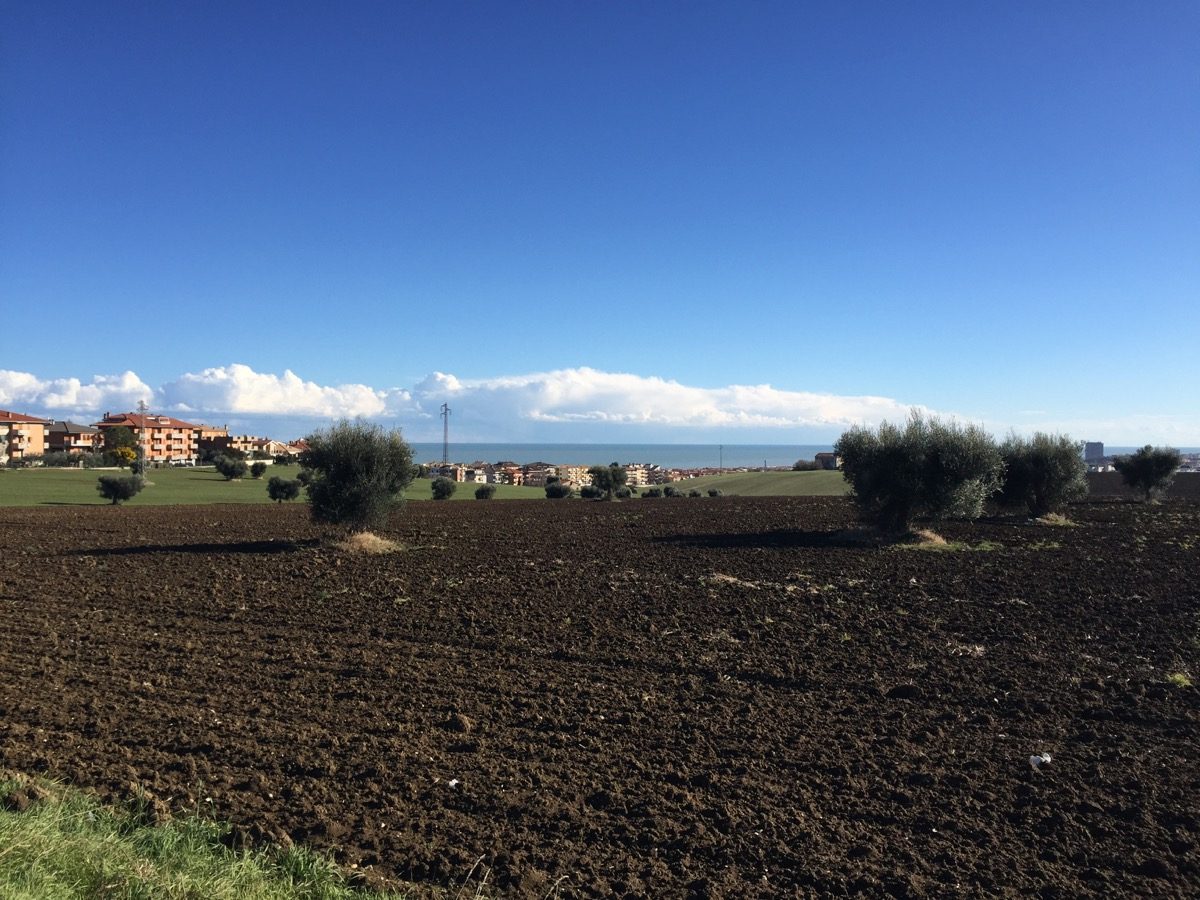 Coming back to Porto Sant'Elpidio