It is on Mount Carpegna that I have prepared many of my victories. Before a Giro or a Tour I don’t need to try all the big climbs one by one. Only once, if I remember correctly, I went to take a look in advance at Mortirolo and Montecampione. But by car. And it didn’t help me much.
Carpegna is enough for me. From Coppi onwards, it is a climb that has made cycling history and then sometimes the Giro has also passed. I can’t tell you how many times I’ve done it, training. You will say that I am a traditionalist. Maybe yes. Always training on the same house roads. Always with the same gears, the same ones I use in racing. Always around without a bottle, because those four fountains are enough for me, I know where they are. One in Carpegna, the town. 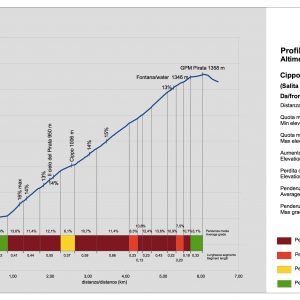 Carpegna is a beautiful town in Montefeltro, famous as a holiday destination, full of historical, cultural and gastronomic attractions. We are in Marche, but there is an air of Romagna.

For those who follow cycling Carpegna is a particularly important place. In 1969 Giro d’Italia passed here. Cippo became famous with the 1973 and 1974 Giro, thanks to the challenges between Eddy Mercks and Josè Manuel Fuente. Beautiful images of it can be seen here. But it is thanks to a man come from Romagna that this place has become a pilgrimage destination for thousands of cyclists. A climber who came from the sea, probably the greatest of all time, certainly the most loved: Marco Pantani, called il Pirata (The Pirate).

When I was a child, my grandfather told me about the great champions of cycling, who were seen as real heroes. When they named Fausto Coppi, Gino Bartali or Fiorenzo Magni, old people used to low their voices as a sign of respect. Today I do the same thing every time I talk to my son about Pantani. Because we must never forget that no one dies until someone remembers it. 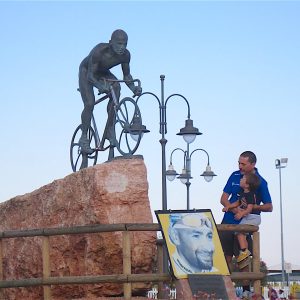 With my son at the Marco Pantani monument in Cesenatico

Several years ago I decided to come here to see this mythical climb, so I left by car and reached Urbania, to cycle up to Carpegna. I faced the climb with tears in my eyes and certainly not because of fatigue, which incredibly I did not feel. The thing that struck me most, however, was the feeling of not being alone. Every now and then I turned to see if there was someone near me, whose breath I seemed to hear.

Surely the countless graffiti dedicated to the Pirate help to impress anyone who comes here pedaling, but I can’t help but think that there is something else, something difficult to explain, like a presence that is there, observes you and helps you to overcome the suffering and hardship. 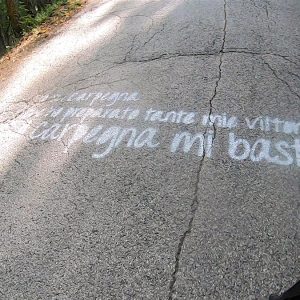 In the past I have faced other climbs that are part of the myth. Fedaia for example, Pordoi, Stelvio. All of them cause indescribable emotions. The famous big climbs lead you to think about the challenge, the champion, a crowd cheering the riders followed by the motorbikes and cars. It seems to hear the voices, the engines, the speakers. There is noise, confusion and a lot of adrenaline that contrast with the silence of the mountain. There are Coppi, Bartali, Magni, Pantani who rise to the Olympus of cycling in a grandiose atmosphere.

There is none of this here. Here the silence remains. Here is Marco. A guy who came to train, alone with himself, to then go on to face the famous climbs and become the Pirate. And in the silence, broken only by the passage of the wheels on the dry leaves, it is easy to hear his breath and maybe imagine him flying away lightly with his unforgettable style. 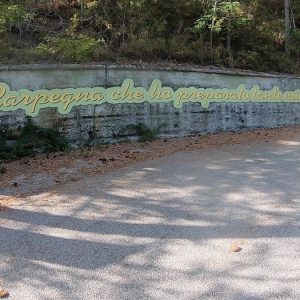 This time I reach Carpegna during a journey I called On the tracks of the Masters, in search of myself, between Porto Sant’Elpidio, on the coast of Fermo (Marche), and Bologna, passing through places that are special to me. I’m on the second stage. Starting from Cantiano, I crossed beautiful villages such as Apecchio and Sant’Angelo in Vado. I come from Belforte all’Isauro, with 2000 m of elevation gain in my legs. I am fatigued and I don’t feel well. I stop for a break in a bar to recover before the climb which is the main goal of the day. Restart and immediately take the road to Cippo. 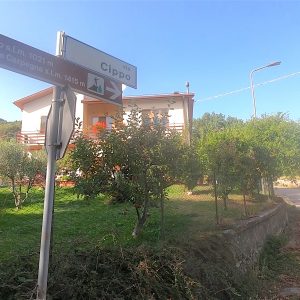 The road to Cippo

It starts immediately with a double-digit slope. Reach a small bridge. The road flattens and narrows, advancing into the woods. The hairpin bends begin, twenty-two in all, each marked by a brown sign with the corresponding number. The slope will practically never give up as far as Cippo. The surprising thing is how fatigue disappears. Until a few minutes ago I was feeling bad. My bike is loaded in bikepacking mode and this worried me. Suddenly my legs seem to have forgotten all the work done before. Evidently my head distracts them, fascinated by what my eyes see. 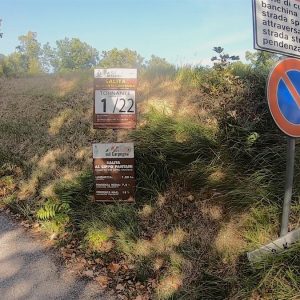 The climb of Cippo begins

It is a multitude of graffiti that recall Marco Pantani and cycling, the real one, the epic one, the one made up of solitary feats in which the champion does not fight with the opponents, but with himself. However, I still don’t hear the cheers of the fans and the adrenaline of the match. I see and hear the guy who trains in the silence of the woods. I am still moved by the reading of I can only hear your breath, when I find the bend 6, the most famous one, the one where I come in front of il Cielo del Pirata (the sky of the Pirate). I don’t think it’s possible not to stop and enjoy such a beautiful and meaningful view. Then I leave. 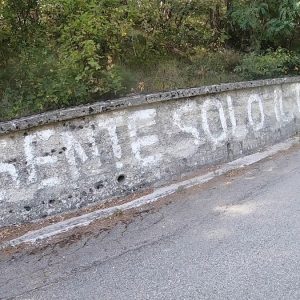 “I can only hear your breath” 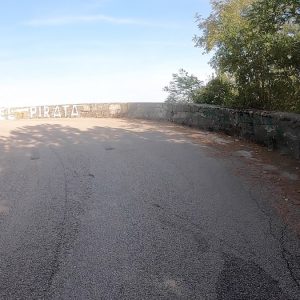 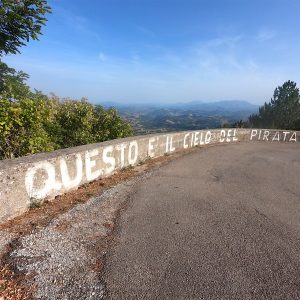 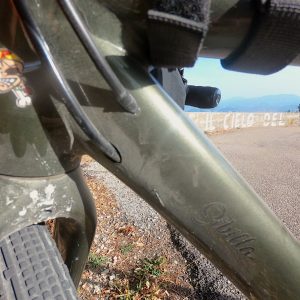 It’s possible not to stop here

The main feature of this ascent is that it is very hard, but shaded. A spectacular view almost never opens. You stay in the woods a lot and the sun shouldn’t be a problem even in the summer months. After about two and a half kilometers you will arrive at Cippo. The road flattens out for 300 meters. There is a kiosk, tables for tourists and above all the monument to Marco Pantani. A sign recalls the famous text Carpegna is enough for me. 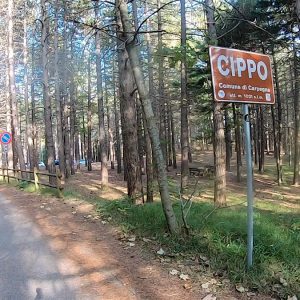 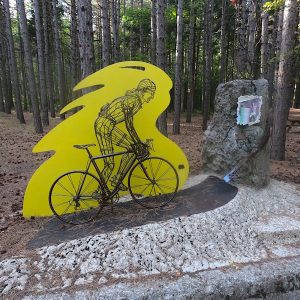 Cippo, the monument to Marco Pantani

There is a barrier to overcome. I like it. You can get here by car and motorbike. Beyond that we are the only ones left to reach the top on our own. A sign reminds us that Mercks get away here. Another one indicates a Romagna-style speed limit. The experience becomes even more mystical. The road is covered with leaves. The hairpin bends become tight. Fatigue makes itself felt, but I savor every meter as a goal. 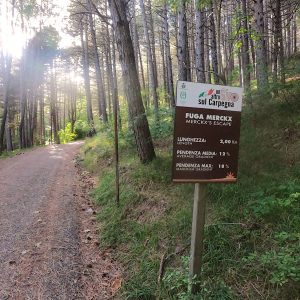 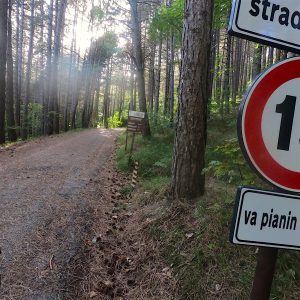 I reach the fountain with the drinking trough. I remembered it with flowing water, fresh and thirst-quenching. Today I find it dry and closed by a fence with a gate. I try to open the tap without success. I know for sure that this was one of Marco’s fountains and I imagine him here cooling off at the end of the climb. 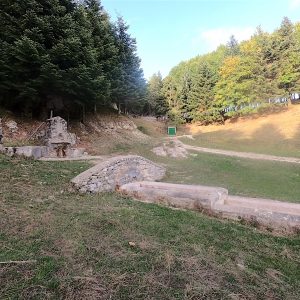 “Always around without a bottle, because those four fountains are enough for me, I know where they are”

The road is now practically flat. I can’t remember the six kilometers with an average gradient of 10%, or at least not as hard as they may appear from a simple reading of the altimetry. About three hundred meters remain. I approach the GPM (the highest point). I have the late afternoon sun in my face. See the silhouette of the Pirate against the light. Stop for the pic. I stay a while to enjoy the moment. Emotion takes over. Marco, the Pirate, will live here forever, under his wonderful sky. 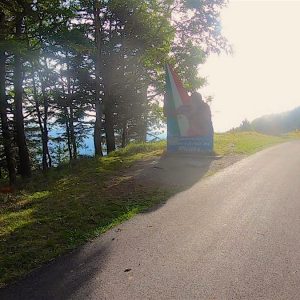 The silhouette of the Pirate against the light. 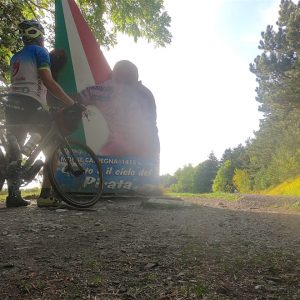 The highest point of the climb of Cippo

I told my journey On the tracks of the Masters in a video, from which the previous images were extracted.